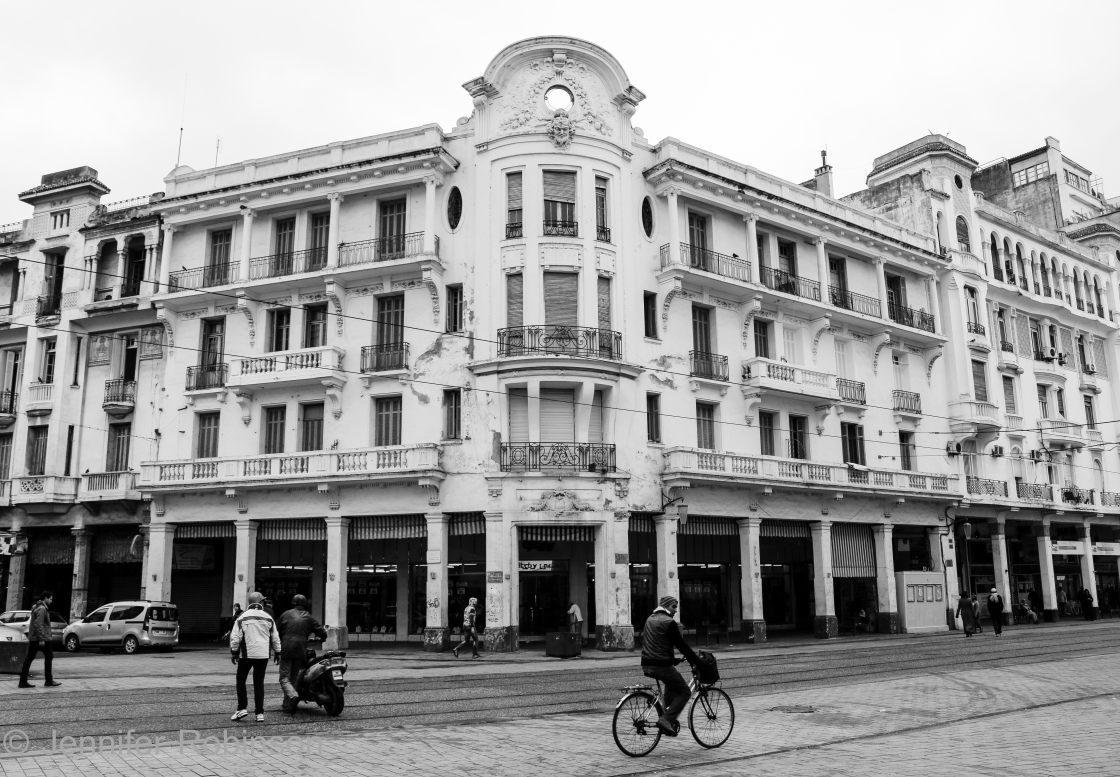 You Must Remember This: Give Casablanca A Miss

Casablanca is a tough city – especially for a female travelling alone. The men around the Ancienne Medina are a handful and hard to shake. So are the taxi drivers.

After a bad experience walking past the medina early in the morning, I decided to turn around and walk along the Boulevard des Almohades, which skirts the waterfront, to get to the 10 a.m. tour of the massive King Hassan II mosque.

The city is congested, reeks of cheap diesel and has a general air of neglect. In a weird way, it reminds me of Fiji except for one major difference: from the air, Casablanca and its environs looks like a giant multi-coloured brown quilt. Green spaces in the city look overwhelmed.

The waterfront boulevard is under construction and there is practically zero foot traffic given there is not really a sidewalk and the shoulders of the road require some careful footwork to avoid twisting an ankle.

Another thing to keep in mind for those who like to walk, road signs are often missing in this area as French place names are replaced with Arabic. But luckily, all of the women I asked for directions were super helpful and friendly.

I had read the less than glowing reports on Casablanca before flying here for the start of my 16-day trip around Morocco. They were true. The city is built for business and not for tourists – and there’s nothing wrong with that. It’s just not the romantic image many of us have of Rick’s Café and the doomed wartime romance between Humphrey Bogart and Ingrid Bergman in the classic 1942 Hollywood film Casablanca.

By chance – and I do mean totally by luck – I found Rick’s Café as I stumbled down streets in my quest to find the mosque. The charming ersatz version of the café was created by an American expat to tap into our desire to experience that film in Morocco’s largest city.

After missing the morning time slot to visit the mosque, I traced my steps back to the café and patiently waited in line with the other tourists for the doors to open for lunch. The food is tasty and decently priced but the décor is what everyone comes to see with attentive waiters dressed in crisp white uniforms and wearing red fezzes.

The walls are whitewashed, the door arches are Moorish and tables are lit with stained glass lamps. And of course there’s a piano for Sam to once again play As Time Goes By. And unfortunately, they allow smoking so it truly does have a 1940s atmosphere.

After dawdling over coffee and dessert, I once again walked to the mosque where a security guard — who couldn’t stop laughing at me — helped me find my way to the ticket counter since I had entered the nine-hectare complex from the side and not the usual front entrance along Boulevard Sidi Mohammed Ben Abdallah.

The entrance fee is 120 Moroccan dirhams (less than $20 US) for the 45-minute tour. I had come prepared with a scarf to cover my hair for inside the mosque but it wasn’t required. I’d still take one just to be safe though and of course dress modestly with your shoulders covered and a long skirt or trousers. You will also need to remove your shoes at the entrance so try and wear something easy to remove.

Moroccans are incredibly proud of this mosque, which overhangs the pounding surf of the Atlantic Ocean and features a retractable roof over the main prayer hall. The fine work of artisans from across the country are on display and all the materials like the intricately carved cedar and patterned marble floors are locally sourced except for the exquisite Venetian glass chandeliers.

Built in just seven years, the mosque can hold 25,000 worshippers with another 80,000 in the sprawling courtyards outside. The minaret, which shines a light towards Mecca after sundown, is 210 metres tall.

The tour of the mosque takes visitors through the prayer hall, with its heated floors and a separate second-floor balcony where female worshippers pray, as well as into the ablutions hall with its public hammams and 40+ fountains.

I had heard there was a spot where you could watch the ocean rolling in under your feet but it wasn’t part of the tour I was on, which was disappointing so instead I walked along a path outside that gives you an amazing view of the mosque and the coastline, including the El Hank Lighthouse.

Istill had some time to burn before meeting up with my G Adventures group so I decided to follow the Lonely Planet’s suggested walking tour of Casablanca’s Art Deco gems.

Again, I found them by sheer luck. I meandered along Boulevard Mohammed V passing by vendors on their way to the Marche Centrale, Casablanca’s main market, with carts laden with juicy fresh oranges —the best oranges I’ve ever tasted.

The Art Deco buildings are delicate and dressed in shades of cream yellow and ivory and decorated at times with zellij tiles and other whimsical touches. They are wilted remnants of their former glory on this grey morning but stunning nonetheless.

Be sure to check out the post office, the Rialto theatre and the Societe Generale Marocaine de Banque. And ladies, one of the most difficult things to remember when you desperately want a coffee is not to wander into one of the men’s only cafés, as I did. Luckily, I realized my mistake before I was asked to leave!

Casablanca is obviously not without some interesting sights but it pales considerably next to its more historical and culturally significant sister cities throughout Morocco. Worth a day visit but not more than two days at most.