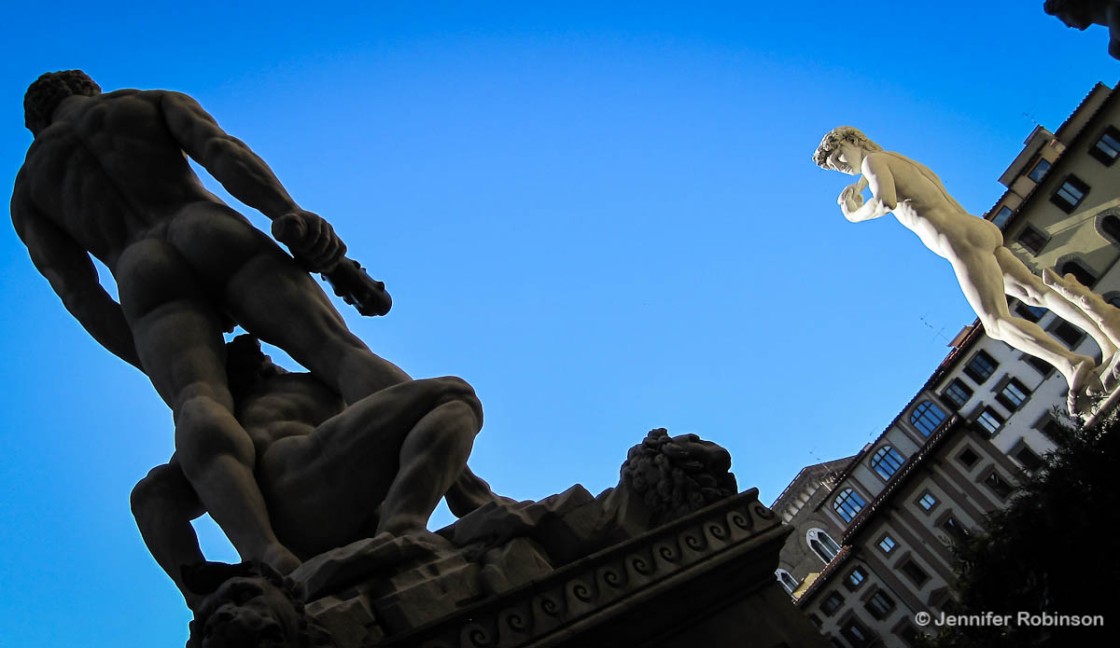 The light in Florence is unlike any I’ve seen anywhere else. It is so warm this city always seems to have a golden glow.

I was too late to get into the Uffizi Gallery on my first day so I bought a ticket for the next day. Back outside, I whiled away my time gazing up at the statues dotting the Piazza della Signoria outside the museum. It was a perfect, cloudless day and the sun cast some interesting shadows.

This is one of my favourite shots from my time backpacking in Europe. I love how when I “dutched” the photo, it created a sense that the statue of Hercules and Cacus clad in shadows seems to loom over the innocent beauty of David who is bathed in an ethereal light. The cudgel of Hercules from this angle looks much more ominous than it does if you view the statue face forward in the piazza.

At the time, I didn’t realize I was capturing a tension between the two statues that has deep historical roots. Art historian Virginia L. Bush has said the brutal statue of Hercules and Cacus, created by Baccio Baninelli, was hated by Florentines when it was unveiled in 1534. It stands in sharp contrast to David, who represented “heroic virtue and civic liberty” to the city’s residents, as well as their “defiance of the tyrannical Medici,” argues the official Florence tourism website.

Another reason the Hercules statue was disliked in the 1500s was because of its appropriation by the returning Medici in 1530 as a symbol of their strength in triumphing over republicanism, represented by the vanquished fire-breathing Cacus.

This tiny outdoor space, therefore, represents duelling viewpoints on how Florence should be governed in the 1500s, as represented in the artistic meanings of its impressive statuary.

The piazza is a great place for people watching and scarfing down gelato while waiting for your tour of the Uffizi to start. For those with a camera, it’s also a perfect place for trying out different ways of shooting the statues that aren’t the obvious frontal views most people snap.